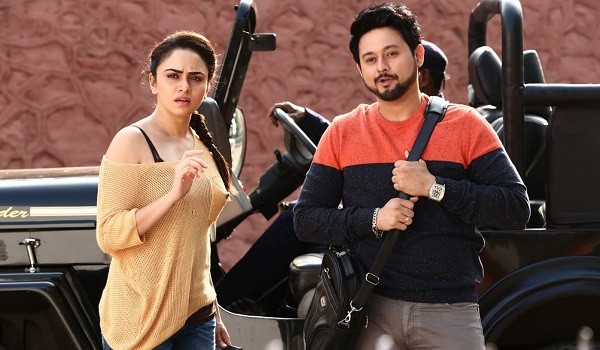 A fresh look at many current happenings in society, the film gives the message of hope to the broken hearted.

Welcome Zindagi directed by Umesh Ghadge is a remake of the Bengali film, Hemlock Society. The film starts with a discussion on love and relationships followed by a song (featuring Prashant Damle (Prashant) in a club. Meera (Amruta Khanvilkar), a fan of Prashant who never misses his shows is also shown in the same frame enjoying the moment.

Meera is a journalist by profession, who catches her fiancé cheating on her just 10 days before her wedding. She is already feeling lonely and ignored since her father, Dr Rajwade (Vivek Lagoo) has remarried after her mother’s death. On top of everything else, she hears that her boss is about to fire her from her job. Cornered in every possible way, she decides to end her life. For this, she meets her father and asks him for a prescription of sleeping pills on the pretext that she isn’t sleeping well. She thinks overdosing on sleeping pills will be a quick way out.

But at the moment she attempts to consume the pills, somebody rings her doorbell. That somebody turns out to be Anand Prabhu (Swwapnil Joshi). He enters the house and sees the bottle of sleeping pills, which he promptly flushes out. However, Anand does not tell her not to end her life – instead, he advises her to do it in a systematic way.

It turns out that Anand is the founder of Happy Ending Society, an organisation that believes every individual has a right to decide his or her destiny. He convinces Meera to enroll in three-day ‘suicide camp’ which will teach her many ways in which to end her life systematically. Convinced by his proposal, she leaves with him for the camp.

The pace of the movie is well maintained and the dialogues are crisp. There are few good cameos by Bharati Achrekar, Mahesh Manjrekar and Mohan Agashe; however the film truly belongs to the lead pair. This film is recommended for family viewing – it is humorous but sympathetic of all the issues we face in our lives, and gives hope to all those going through problems.

One Response to Review: Welcome Zindagi