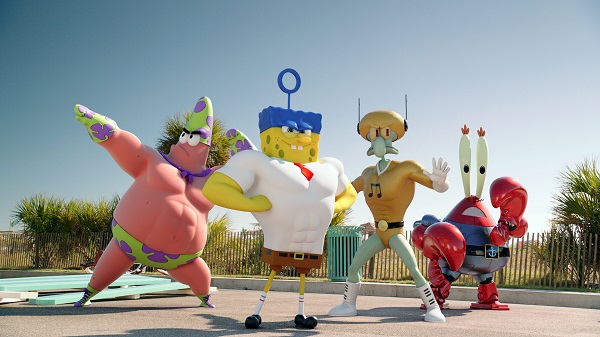 Review: The SpongeBob Movie: Sponge Out of Water

Watch this film only if you’re a SpongeBob fan who doesn’t mind a slightly weird storyline and tonnes of hamming.

This week sees the release of the SpongeBob cartoon series famous on the Nickelodeon cartoon network turned into a full-fledged movie. At the outset, let me warn you that this film will leave you cold if you’re not a fan of silliness or SpongeBob.

SpongeBob (voiced by Tom Kenny) works as a cook at The Krusty Krab, a burger joint famed for its yummy Krabby Patties owned by Mr. Krabs (voiced by Clancy Brown) in the underwater town of Bikini Bottom. Squidward, Patrick and Sandy are SpongeBob’s buddies. Residents of Bikini Bottom are always in high spirits while gorging on yummy Krabby Patties, except for Plankton (voiced by Doug Lawrence) who tries every trick to steal their secret recipe. During one of his attempts he tries to steal the secret recipe, it vanishes entirely, leaving Plankton and SpongeBob clueless.

Deprived of their yummy Krabby Patties, the residents of Bikini Bottom go crazy and the fun loving place turns into a site of utter chaos. SpongeBob teams up with Plankton to find the secret recipe and get to the bottom of the disaster at Bikini Bottom. Through their team work, they build a photo booth time machine to travel back in time and get hold of the secret recipe.

It turns out that bad tempered and crazy pirate Burger Beard (Antonio Banderas) has stolen the secret recipe; he plans to retire from piracy and run a food truck business. The yummy Krabby Patties which were the most-wanted food item underwater at Bikini Bottom, score an instant hit with people above the water. SpongeBob and the gang soon realise that the person having the secret recipe is not only huge in size as compared to their miniscule selves, but he also has a magical book that has the tale of Bikini Bottom written in it – and he can rewrite the ending. Luckily, SpongeBob gets hold of the last page which helps him to rewrite the story – he adds superpowers and a huge size to himself and his gang friends.

These superpowers help SpongeBob blow powerful bubbles, while Sandy becomes a huge sized squirrel. Patrick is able to attract all the ice cream cones – this one makes you laugh out loud. Mr. Krabs’ retractable claws remind you of Marvel’s Iron Man, while Plankton develops a massive green-coloured body (like The Hulk) with a tiny head.

The film is strictly okay, with very few genuinely funny moments. I frankly thought the entire film should have been an animation instead of this weird mish-mash. However, there are a few trademark SpongeBob silly scenes which will crack you up – but only if you’re a kid and a fan of the Nickelodeon series.