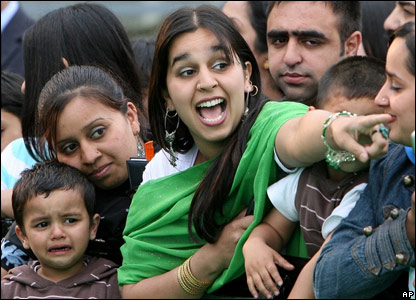 We all grow up idolising that one person we often see on the big screen. He means the world to us. Once glance from him, or if you are lucky, a full second of eye contact, can translate into moments that are cherished for life. Such is the status of most Bollywood stars in India. But some stars just don’t care if they are the centre of their fans’ universe. And when they don’t care, they just don’t care.

Towards the end of 2010, the producers of a film were facing a difficult, but not unusual, task – they had to promote a run-of-the-mill slapstick comedy. The cast comprised a series of nightmares – an out-of-work balding actor with a border-line alcohol addiction; a Superstar with very few scenes in the film (so of course, he refused to promote the film); an actor-turned-producer  of the film (who was the ringmaster of the circus when the film was being shot); two passably average actresses and a seasoned comedian.

The film’s promotions had the usual harebrained marketing strategies backing them. That apart, nobody had thought about how awful it would be to work with this jamboree of ‘stars’. Of the several marketing activities planned around the film’s promotions, one was to get the Superstar (the only decent name in the cast) to talk to his fans. This activity is called Celebrity Voice Chat and is, to put it mildly, a money-making racket.

This is a voice-based activity, where the mobile user calls a given number to speak to a celebrity. The numbers of subscriptions are huge, but not all of them can talk to the celebrity. Thus, the mobile operator selects 10 or 12 subscribers out of a pool of lakhs of hopefuls, who then get a chance to briefly talk to the star. Other subscribers can listen in on their conversation. The crazed fans pay as much as Rs 30 for this slim chance of a lifetime.

Executing this activity was no cake walk. After multiple tantrums and several ego-hassles, complete with games of Chase-the-Manager, the Superstar agreed to do this activity “for his fans”. Finally, the activity date was fixed and the promotions kicked off. Within just three days, lakhs of users had subscribed to talk or just hear their favourite Superstar’s voice. The producers were happy with the film’s promotions, and the mobile operator was laughing all the way to the bank.

On the morning of the activity day, the Superstar who was “doing this for his fans”, decided to call it off. An inane reason – “Today I am shooting and I can’t promote some other film on the sets” – was given for the decision. Mobile users had already paid for participation, and if the mobile operator was unable to get this going, he would face an enquiry by the Telecom Regulatory Authority of India (TRAI).

The producer of the film was called to handle the situation. Begging and pleading, and singing paeans to their friendship, he finally persuaded the Superstar to go through with the activity. The Superstar agreed. Skipping off happily, the team readied for the activity at Mehboob Studio later that afternoon, on the sets of another film.

The clock struck 2 pm, and the calls stared pouring in. But our Superstar was nowhere to be seen.

Subscribers had dialled in and were eagerly waiting to hear his voice. After all, this was the day they would remember for the rest of their lives. This was no ordinary man – and they would hear him in person. But where was He?

At almost a half hour after 2 pm, our Superstar walked out of one of the shooting floors and went straight to his vanity van. 15 minutes later, he was out of his van, but then he wanted to do the activity after he had had his lunch – and to hell with the fans waiting for over an hour on their phones across the country.

After a two-hour delay, the Superstar decided to honour his commitment towards his fans. He took the first call and heard his fans’ jubilant voices – despite the wait – at the other end.  But he cringed and quickly pushed the handset away from his ears. A curt “Hello” was said into the phone and he gestured to the team to drop the call and take the next one. The next caller was a woman, so she got a cursory “How are you?” and “Do watch my upcoming movie,” from him. But the pressure of talking to these excited strangers got to him. He gestured again, this time to say, “Stop the activity”.

Handing over the handset, he walked back to his vanity van and shut the door behind him.

The producers and mobile operator were relieved that he at least spoke to two people; they wouldn’t have to face any legal hassles. The paid subscribers were informed that due to technical difficulties, the activity could not be completed. Subsequently, the movie was a disaster at the box-office.

Moral of the story: For a Superstar, facing two euphoric callers, spending millions of other people’s rupees and disappointing lakhs of fans is all in a day’s work. No Problem!