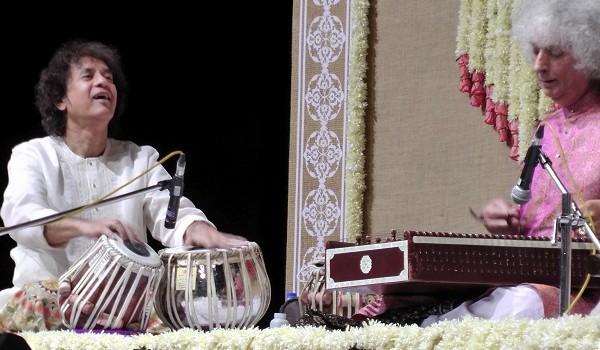 The two legendary Hindustani classical musicians came together to raise funds for a river-side girls’ school and a divinity centre.

Anand Trust, a charitable organisation, brought together the legendary maestros of Santoor and Tabla – Pandit Shivkumar Sharma accompanied by Ustad Zakir Hussain, for a concert at Nehru Centre, Worli.

Pandit Shivkumar Sharma and Ustad Zakir Hussain, the world’s greatest performers on Santoor and Tabla respectively, are two legends of Indian music who have collaborated together since the early 1970s. Panditji has been the pioneer of the Santoor and is credited to introduce the instrument to the Indian Classical repertoire. Tabla genius Ustad Zakir Hussain is one of the most famous and recognisable names in the Indian classical and world music movement. Winners of innumerable amounts of accolades, both musicians have mesmerised and touched millions of hearts the world over, with the finest music they have produced together and individually.

The peerless, mystical and compelling musical duo created a musical symphony by performing together at Nehru Centre Auditorium. Proceeds from the concert will be used to aid and support Shree MA Anandamayee Kanyapeeth Girls School situated on the banks of the river Ganga at Varanasi, and the Anandamayee Divinity Center being built on the banks of river Narmada at Bhimpura. The boarding school for girls is run on the ancient Gurukul system and runs only on donations as education, boarding lodging, etc is gratis. The Anandamayee Divinity Center will have a meditation hall and rooms for ascetics and senior citizens who wish to come here for spiritual retreats.