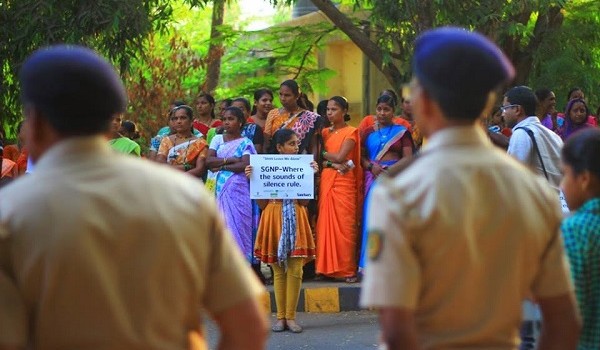 It is an idea that needs urgent replication all over the country. A group of over 350 persons, comprising volunteers, school children, journalists, conservationists, bird and animal enthusiasts and more importantly, officials of the Sanjay Gandhi National Park (SGNP), participated in a ‘silent’ event to demand that SGNP be declared a silence zone.

The group met at the SGNP gates at 7 am on Sunday, April 27, and stood silently with placards for passersby to see. The campaign was aimed at spreading awareness that all parks and sanctuaries are hallowed grounds that demand silent appreciation from those who visit their precincts.

“SGNP woke to birdsong in the company of 350 kids, volunteers and forest officials, all gathered to express their silent support for Mumbai’s incredible forest and its wild denizens,” said Valmi Shah Shirodkar of Sanctuary Asia. “The Sanjay Gandhi National Park is Mumbai’s lifeline – it provides us with clean drinking water and invaluable climate control services. It is home to more butterfly species than the whole of the UK as well as free-ranging leopards and countless other mammals and birds. Having the park declared a silent zone will go a long way in protecting the forest.”

The campaign is jointly initiated by Maharashtra Forest Department and Sanctuary Asia. “The forest staff was led by Vinay Gupta, Director SGNP, and there were a host of NGOs, conservationists and journalists. [This is] the first silent event of its kind in support of a national park in India, and we fully expect that this quiet and peaceful demonstration will become a trend across India in the days ahead,” Valmi said.

Young children, some dressed as flamingos and miscellaneous birds, plus a host of volunteers, stood silently at the entrance of SGNP, on both sides of the forest access road, holding up placards for thousands of walkers to see. Later, all participants agreed that the morning provided great relief and contrast against the din and cacophony that engulfs their lives on a daily basis in Mumbai.