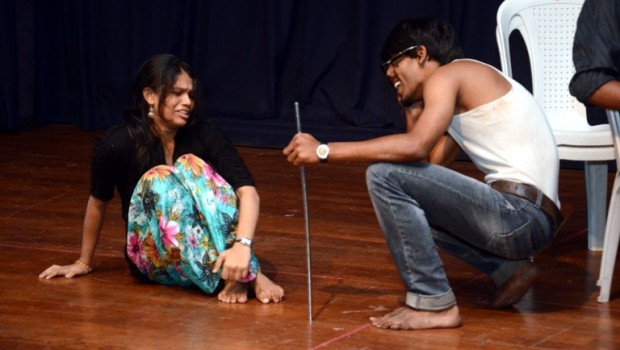 Rape and violence continue to dominate the mindscape of young Mumbaikars, it seems. At the ‘Let’s Act’ drama festival held yesterday at Ravindra Natya Mandir Mini Theatre, the students of RD National College elaborately re-enacted the recent Delhi bus-rape incident, in a play titled Is This Humanity? This was one of the five plays that was selected for re-enactment in the finals of the drama festival, to be held at Sophia Auditorium on January 5, 2013. 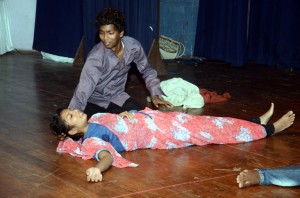 The other teams selected for the finals were Pragati College, which enacted a humourous play Adjustment (about how one needs to make an adjustment in all spheres of life), KC College (with a play on communalism based on the Panchatantra), Mumbai University’s Department of Journalism and Communication (with The Darkest Desire, a play about incest) and Swami Vivekanand College (Wakt Nahin Hai, a balletic satire about modern living.)

The entire approach was minimalistic, with emphasis on creativity and 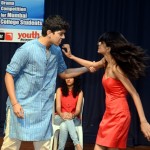 powerful acting rather than lavish sets. The only stage sets available were two 1.5 feet levels, two nine inch levels, and some tables and chairs. All the work was done by the students themselves, without help from professionals.

This drama competition is organised by Helen O’Grady International, in benefit of ADAPT (formerly, the Spastic Society of India). Helen O’Grady’s Youth Theater workshops are enabling students to express themselves creatively.