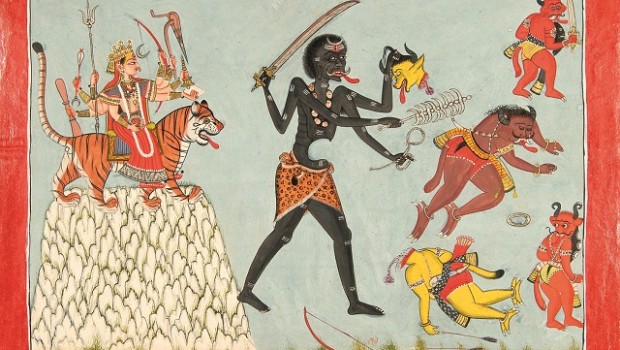 Historically-significant Indian miniatures, modern art pieces include Mandi School works which had left India in 1960s before being purchased back.

Opening its new annual calendar of auctions, Osian’s is bringing together a wide range of historically significant Indian miniatures and modern art in its Forty Masterpieces Auction to be held on Saturday, 13 April 2013, in Mumbai.

The opening preview exhibition of the Auction will be held at 7 pm on Friday, April 5, at the Osian’s Headquarters at G-2B Nariman Bhavan, Nariman Point. The Auction lots will be available for private previews at the same site from April 6 to April 12, 2013.

The auction comprises of 40 lots and is valued at the lower estimate at approximately Rs 5.6 crore (higher estimate Rs 8.4 crore; with average estimated lot price range Rs 14 to 21 lakh). Among the highlights in the section on Indian miniatures, there are some brilliant Mandi School works from the Ramayana and Devi Mahatmya series originally from the Royal Mandi Library Collection, which had left India in the 1960s and was purchased back by Osian’s from various Sotheby’s auctions to bring them back to India in 2005-2006. These works cannot be exported out of India now.

Regarding the consolidation and re-strengthening of the Osian’s Group and the Auction House, Neville Tuli, Chairman, Osian’s Group says, “For the first time we have a fixed annual calendar for the Auction House, ranging from auctions for the antiquities, fine and popular arts, to film and sporting memorabilia, to rare books, prints and photographs. The Auction House has been separated from all other activities (eg. the film festival, the conservation laboratory, the museum, and the like) so as to make it a specialised leader once again and to start rebuilding the market for the India’s arts, culture and heritage. The last few years have seen immense pressures and challenges, and they have only made us recognise that the unique business model for the arts needs ever more diligence, buffers and care. A strong art market is pivotal for the growth of knowledge and the spreading of awareness and sensitivity regarding one’s cultural heritage.”