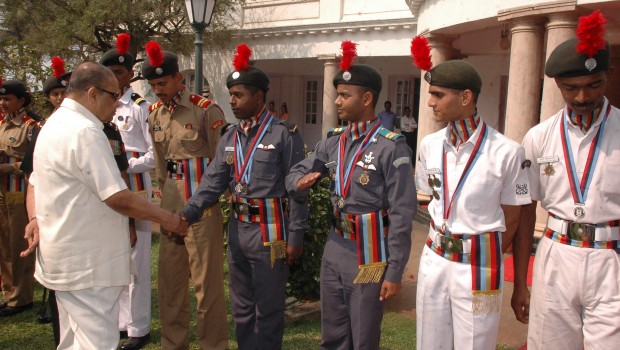 They won for the fourth consecutive year at the Republic Day camp in Delhi recently; State Governor feted the cadets.

The Maharashtra Contingent of the National Cadet Corps (NCC) won the prestigious Prime Minister’s Banner for the fourth consecutive year at the Republic Day camp held in New Delhi recently. This win is the 16th for the Maharashtra NCC, a record on its own.

On Saturday, State Governor K Sankaranarayanan feted the victorious Corps at his official residence in Mumbai, the Raj Bhavan. Speaking on the occasion, the Governor congratulated the National Cadet Corps for shaping the character of the youth by inculcating in them discipline, patriotism and an urge for social service. He expressed the hope that the NCC would mould the character of several more youth in the country.

Maj General S Sengupta, Additional Director General of Maharashtra NCC, informed the gathering that the strength of the Maharashtra NCC is being increased from 1 lakh to 1.20 lakh cadets this year onwards. He also added that Maharashtra NCC has bagged the Champion Directorate Trophy for the 16th time during the last 22 years.