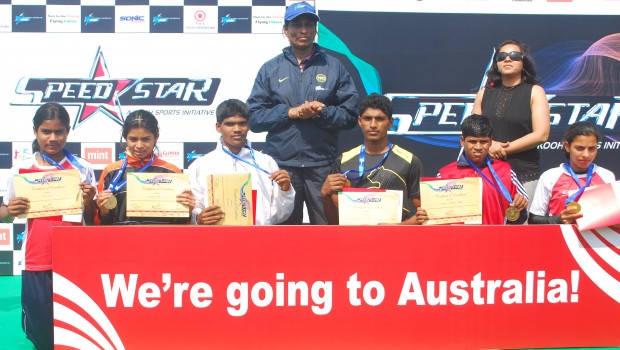 Talent hunt to identify fastest youngster in the Under-12, 14 and -16 age groups was held in the city today. PT Usha judged the event.

The finale of ‘Speedstar’, a first-of-its-kind talent hunt to identify the fastest running sensation in India, was held at Ghatkopar today. The enterprise is the brainchild of KOOH Sports’, under the aegis of the Athletics Federation of India (AFI). A total of 76 finalists were selected to participate from amongst 12 cities in the country in three age categories –  Under 12, 14 and 16 – in a 100 meter sprint.

The finale was held at the Ghatkopar-based KJ Somaiya Sports Complex. The contest had been spread over a period of two months, with nationwide participation from around 800 schools and over 10,000 children.

The six winners of the grand finale will now head for a week-long intensive training in Australia (courtesy Griffith University), the official academy partner. Under the guidance of Sharon Hannan (the noted Australian athletics coach who trained Sally Pearson, gold medallist at the London Olympics, 2012), the winners will have an opportunity to gather insights of the professional athletic circuit.

“Initiatives like these will go a long way in cultivating the next generation of athletes in India. I am extremely delighted to be associated with this initiative and being instrumental in creating awareness on the importance of athletics to young Indians,” PT  Usha said during the event.

Adille Sumariwalla, President, AFI said, “The Speedstar initiative is indeed a commendable programme and it is heartening to see the private participation in the sector. We are confident that India will get the much-needed thrust at the grass roots level to create a pool of athletes while generating an attitudinal shift to pursue sports as a career.”