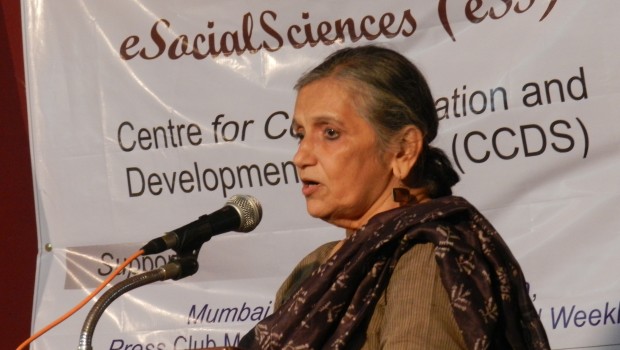 Over 80 women journalists from different media and languages across the country went into introspection mode for two hours of intensive debate, when a panel of six speakers from within and outside the media showed how improved coverage by media can help creating safer public spaces for women. 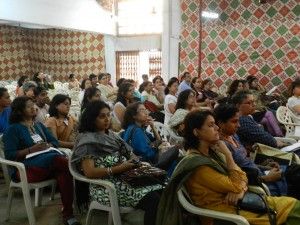 Offering her perspective on media’s constraints, Meenal Baghel, Editor, Mumbai Mirror, candidly admitted the lapses on the part of her publication in the past, while urging the Network of Women in Media (NWMI) to continue with its gender sensitisation training sessions for journalists in the newsroom. This was at the open session on ‘Women, Violence and the Public Space: How the media can tell that story better’ organised by NWMI in Mumbai on Saturday, February 2, as part of its three-day convention to celebrate a decade of its birth.

“Media’s voyeuristic appetite for gruesome details is insatiable,” pointed out Flavia Agnes, eminent lawyer at the forefront of the women’s movement. “This does nothing to help the victims, who do not wish to be labelled as victims all their lives. Media should end the hypocrisy of naming every single detail of the victim’s life except her name, and must help her in rebuilding her life after the trauma.”

The overall theme of the convention was ‘Women, Violence and the Media’, chosen for its topicality against the backdrop of the recent brutal rape-murder of a young woman in Delhi, which triggered unprecedented public outrage across the country.

The statement issued by the NWMI at the conclusion of the convention strongly calling for more sensitive reporting, urges the media to be a part of the solution and not of the problem of women already traumatised by violence. The statement makes a special note of the thousands of girls and women all over the country who have been physically, sexually, psychologically abused and injured or killed, and appeals for due media attention to sexual violence perpetrated on dalits and adivasis, as well as women in militarised zones, where security forces are granted impunity by law.

At the public event on Saturday, Harish Sadani, who heads the NGO Men Against Violence and Abuse (MAVA), Nandita Gandhi, Co-Director of Akshara, Lina Mathias, Senior Assistant Editor with EPW, and Anandita Sengupta, feminist blogger at Ultraviolet, offered guidelines and practical suggestions on how the media can help a survivor of violence cope with and overcome the trauma , rather than titillate and pry into private lives which intimidate and alienate the victim.

The convention also held discussions on ‘Struggles for survival and violence against women: the role of the media’. Lina Mathias drew attention to the steady erosion of Mumbai’s robust  tradition of collective action to demand accountability, and pointed out that women cannot possibly remain safe if the social and political culture has degenerated, making everybody unsafe. In a session on ‘Revisiting media coverage of the 1992-93 Mumbai riots’ explored Pratap Asbe, former Political Editor, Maharashtra Times, Meena Menon, Chief of Bureau, The Hindu, Mumbai, and author of Riots and After in Mumbai, Jyoti Punwani, who has done extensive reporting on the riots and their aftermath over  the past 20 years, Shahid Latif of Inquilab and Sukanya Shetty from the Indian Express explored nuances of coverage by the English, Urdu, and Marathi media and discussed learnings for the future.

The session on ‘Virtual Violence: Are Sections 66A and 67 of the IT Act the answer?’ discussed such forms of violence on the Internet as virtual stalking, harassment, abuse, impersonation, or unauthorised transmission of private photographs, and whether the legal remedies available are useful and adequate.