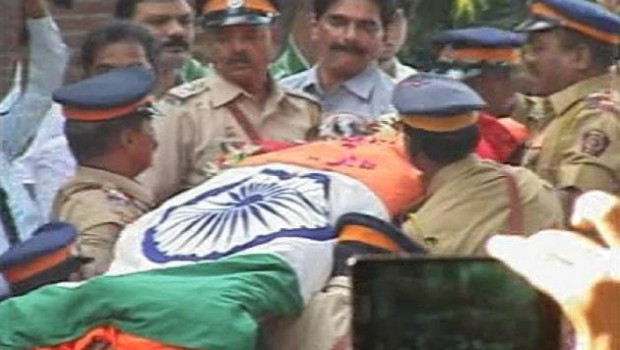 Shiv Sena founder and chief, who passed away yesterday, was laid to rest with full State honours on Sunday evening.

Mumbai city came to a standstill on the day Shiv Sena chief, and the city’s original Tiger, Bal Thackeray, was laid to rest at Dadar’s Shivaji Park. He was 86, and had been ailing for a long while from a pancreatic disorder. Over 20 lakh people thronged the streets of Mumbai, accompanying the funeral procession from Thackeray’s residence Matoshree at Bandra, to Shiv Sena Bhavan and finally to Shivaji Park.

Shivaji Park witnessed a historic turnout that comprised mourners from the city and Maharashtra, State and national politicians, members of the Hindi film industry and of course, Thackeray’s own family. Uddhav, Thackeray’s youngest son and political heir, lit the funeral pyre at about 6.30 pm. Thackeray Sr was given a funeral with full State honours.